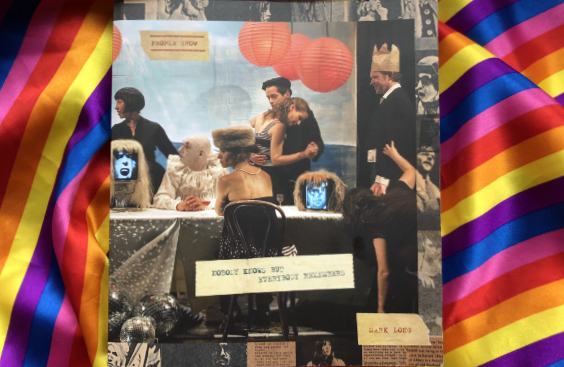 Mark Long’s book No One Knows But Everyone Remembers is fantastic. Written for the company’s 50th Anniversary (about 5 years ago) it manages to convey the company’s history, approach and philosophy through a hugely compelling and entertaining string of moments, anecdotes and stories.

Starting in the sixties, this book also works as a Time Capsule for London, an emerging alternative arts scene and British society in general. It also serves as an origin story for a whole strand of theatre that eschews narrative and playwrights – Stan’s Cafe included.

Across this half century long story we encounter births and deaths, waves of gentrification and The People Show’s evolving epochs. Early chapters we meet future luminaries such as Sam Shepard, Mike Figgis and Stephan Rae; later chapters are full of our mates. It starts in another world, a world of freewheeling anarchy, two week runs, fees paid in cash and shows booked with no name or theme, just a number. It ends in a world where a marketing hook is needed for a one night booking on a budget fit for just three people on stage. Theirs is an inspirational and emotional tale.

Inspiration comes from The People’s Show’s extraordinary achievements and the ethos that guides them. Their dedication and work ethic continually shines through, along with their openness to chance, inspiration and making the most of any opportunities that present themselves. Emotion comes from how personal it is, to them and to us.

I recognised so much in this book, almost every page has a Stan’s Cafe equivalent and there is a huge overlap between Mark’s opinions about theatre and mine. This correspondence is reassuring, validating and so complete that it’s even a little disconcerting.

That said there is so much in this book I don’t recognise. The People Show’s story is more anarchic, colourful, glamorous and globetrotting than ours. This book contains more violence, more fires, more robberies, more arguments, more live music, more tumbling, more Soho strip-clubs and London street life than we’ve ever could.

Mark is a master story teller, concise, witty and self-deprecating, with a great sense of timing. His character sketches, often mythologising, are almost always warm and generous, even the administrator suspected of ripping them off is more admired than reviled. Tellingly he often appears in these stories in the third person; Mark retreats to become one of the collective. This is a tale of an evolving group of peers working and sharing their lives together. It is apt that people are at the heart of The People Show.

The book is beautifully designed and jammed with photographs. I think it should be essential reading for anyone connected with devised theatre or running their own theatre company. For everyone else it’s not essential, but it is recommended as a great read (we’re not on commission).

Welcome to our journal, news and ramblings on Stans Cafe’s activities and other related (and un-related) things.